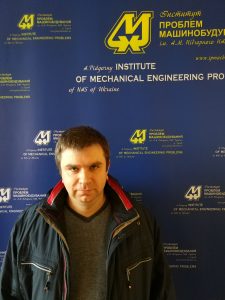 In 1944 Academician G. F. Proscura organized the Laboratory of Problems of High-Speed ​​Machines and Mechanisms, which in 1948 was merged with the branch of the Institute of Heat and Power of the Academy of Sciences of the UkrSSR, headed by A. P. Filippov – a student of G. F. Proscura.

Significant contribution to the creation of unique hydrodynamic stands by which the model tests were carried out, as well as the design of flow parts of hydromachines were made by E. S. Agibalov, V. M. Dedkov, P. M. Sukhorebryi, Yu. I. Fedulov, L. O. Sheludyakov.

Under the guidance of G. O. Sokolovsky and then V. I. Gnesin, who headed the department of nonstationary gas dynamics and aeroelasticity, mathematical models of spatial stationary and non-stationary flows of liquid and gas through turbomachine blades were developed, in particular, the model of the non-stationary transonic gas flow through the turbine stage, which had a world priority. A. O. Bykov, V. A. Vanin, O. I. Golubev, S. V. Yershov, A. V. Rusanov, V. G. Solodov and others contributed significantly to the development of methods of computational hydro-gas dynamics.

On the basis of these studies, in the mid-1990s S. V. Yershov and A. V. Rusanov, (the first in the field of the former Soviet Union) created a complete program complex FlowER, which by this time remains the main instrument for many power machine-building enterprises to calculate spatial viscous flow in flow parts of turbomachines.

Since 2007 the Department of Hydroaeromechanics of Power Machines was established, headed by Doctor of Technical Sciences A. V. Rusanov. Under his direction, the priority direction of applied research of the Institute continues to be developed i.e. scientific support of the creation and modernization of powerful turbines of TPP (Thermal Power Plant), CHPP (Central Heating and Power Plant), NPP (Nuclear Power Plant), HPP (Hydro Power Plant) and PSH (Pumped-storage hydroelectricity), as well as the development of power plants of low power. The Institute developed or upgraded a large number of flow parts of turbomachines, in particular turbines T 100, K 1250, PL20, low power turbines (30-100 kW) for cogeneration units operating on low boiling working bodies, etc.

The basic researches in the field of hydro aeromechanics are carried out, which include the development and improvement of methods of mathematical modeling of spatial viscous turbulent flows of liquids and gas, as well as the design of flow parts of steam, gas and hydraulic machines, and the study of physical processes occurring in them. Besides A. V. Rusanov, Yu. A. Bykov, D. Yu. Kosiyanov, N. V. Paschenko, R. A. Rusanov, M. O. Chugay, O. M. Khorev take active part in these works. A new numerical high accuracy method is developed for modeling the flows of non-viscous compressible and incompressible working medium on unspecified unstructured meshes and its algorithmic scheme. The method differs from the existing ones because for the first time for unspecified unstructured meshes, it was possible to apply effective non-linear implicit splitting schemes and also a recursive approach to the definition of high order derivatives without rotation of large matrices. For the first time, in order to take into account the real properties of working bodies in three-dimensional calculations, an interpolation-analytical method for approximating the modified water and water vapor equation of the IAPWS-95 and Benedict-Webb-Rubin with 32 members is proposed.

The scientists of the department have a world priority in solving the problems of airelasticity with respect to the flow parts of turbomachines (head V. I. Gnesin, responsible performers L. V. Kolodiazhna and Yu. A. Bykov). These studies allow obtaining not only new fundamental knowledge of the intricate physical phenomena of non-stationary aeromechanics, but are also used during the refinement of turbomachines with long shoulder blades. Research is being carried out to create the scientific basis for thermoelasticity, since at some operating conditions the temperature can significantly affect the physical properties of the blades and the conditions of their contact with the flow of the working fluid. The mathematical model and numerical method of the aerobic behavior of the shoulder blade in the transonic flow of the ideal (viscous) gas (the problem of non-stationary aerodynamics and elastic oscillations of blades) is developed.

The proposed methods for calculating aerodynamic and airelasticity characteristics of flow parts allow for the given geometry and operating modes of turbine (compressor) stages to obtain: non-stationary fields of gas-dynamic parameters; nonstationary loads acting on the blades and their spectral analysis; amplitude-frequency spectra of blades oscillations. The use of them allows to predict aerodynamic and airelasticity characteristics of blade devices, possible self-excited oscillation (flatter) zones or self-oscillations and increase efficiency, reliability and extend the life of blades of a turbomachinery (compressor) by reducing non-stationary effects, non-stationary loads and blade oscillation amplitudes. The mathematical models, algorithms and software complexes for the calculation of the aerothermal-elastic interaction of adjacent stages in a three-dimensional stream of viscous gas in the compartment of an axial turbomachine are developed.

The method, on the basis of which the algorithm of designing high-efficiency flow parts of steam, gas and hydraulic power plants with the use of models of different difficulty levels – from one-dimensional to spatial including models of calculation of spatial viscous turbulent currents was created. An important part of this algorithm is the methods of constructing three-dimensional geometry of blades of axial, radial and radial axial turbines, as well as axial and aseadric compressors. These methods are implemented under the direction of A. V. Rusanov created by the IPMFlow software, which is the development of FlowER and FlowER-U software. These results allowed to carry out applied researches on improving the efficiency of flow parts at the stages of designing and modernizing power machines of various applications, including new ones for the institute – Turbine Expansion Engine and Turbo-Units on specific working bodies (organic low boiling working bodies, hydrogen, carbon dioxide, etc.). These developments have been implemented and already in use in a number of research and development projects with the following companies: SJSC «SE Ivchenko-Progress» (Zaporizhzhia, Ukraine), the State Enterprise NKSC «Zorya-Mashproekt Gas Turbine Research and Development Complex» (Mykolayiv, Ukraine), LMZ (St. Petersburg, Russia), «NPC Salut» (Moscow, Russia), PJSC «Sumy NPO» (Sumy, Ukraine), PJSC NPP «Saturn» (Rybinsk, Russia), Motor Sich JSC (Zaporizhzhya, Ukraine), Alstom Power Elblag (Elblag, Poland); PJSC «Turbogas» (Kharkiv, Ukraine), Turboatom OJSC (Kharkiv, Ukraine), Kharkiv turboengineering LLC (Kharkiv, Ukraine), NPV «Donventylator» (Kharkiv, Ukraine), Ural turbine factory (Yekaterinburg, Russia).

Hydromechanical Stands of the Hydromachines Laboratory of A. Pidhornyi Institute of Mechanical Engineering Problems of the National Academy of Sciences of Ukraine after the modernization meet all the requirements of the international standard МЕК 60193, which allows, taking into account many years of research experience, to conduct testing and acceptance testing of vertical hydraulic machines of all types. These stands have become a National Heritage. The methods of automated experimental research of flow parts of models of hydraulic turbines are developed. In recent years the final tests at Hydromechanical Stands have been conducted for the HPP Saint-Joan (Brazil) and HPP Rukatayo (Chile) for EKS-15 turning-blades hydro-turbines. A numerous study and analysis of the peculiarities of three-dimensional currents in the elements of the flow part of the turning-blades hydro-turbine and the pump-turbine have been made, on the basis of which recommendations on ways to increase the efficiency of flow parts during the modernization of existing hydroelectric power plants of the Dnipro cascade and the design of new HPP and PSH are developed. The research of a number of working wheels for a pump turbine of the Dniester PSH with splitter wheels is conducted, that is, they have blades of different sizes. The leading specialists in hydraulics of the Institute are Y. S. Agibalov, V. M. Dedkov, P. M. Sukhorebryi, A. M. Khorev and others.

In addition, research is conducted on promising areas:

– development of mathematical models and methods for calculating the flow of incompressible fluid in the elements of hydromachines, taking into account cavitation;

– development of mathematical models of steam flow in flow parts of turbomachines taking into account condensation.

Today, the Department of Hydroaeromechanics of power machines employs 20 people, including 4 Doctors and 9 Candidates of Sciences. The scientists of the department have published 7 monographs and over 600 articles in scientific journals.

6 Doctoral and 23 Candidate’s Theses have been prepared and defended.